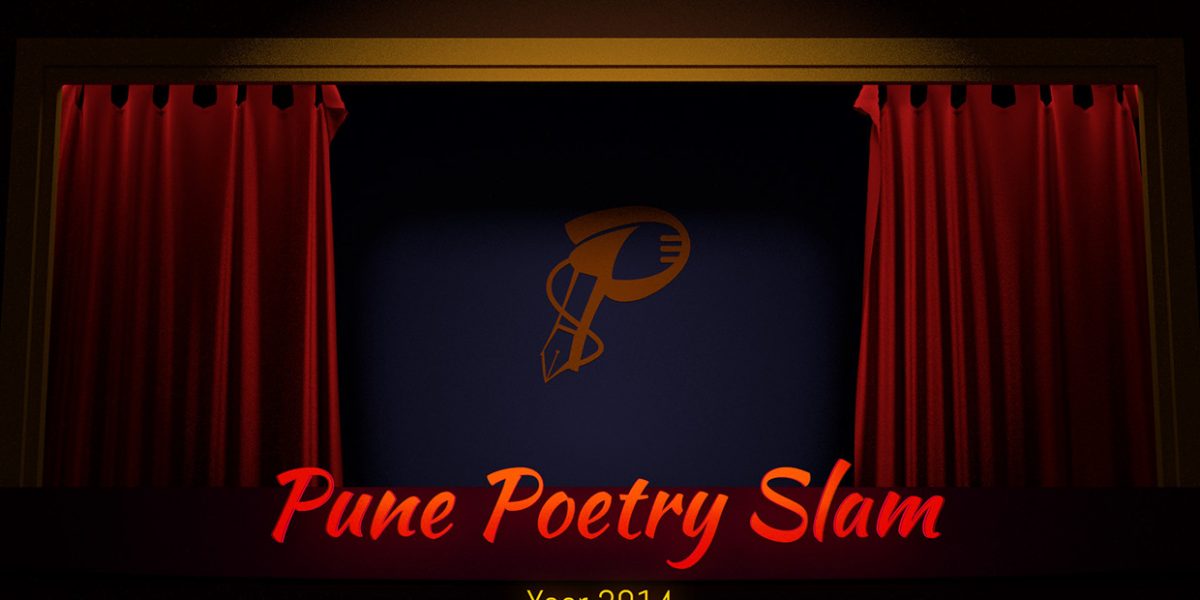 The “Pune Poetry Slam” movement officially began at November of 2013, when a group of school students — inspired by western poets like Phil Kaye, Sarah Kay and Anis Mojgani — decided to start their own small slam sessions in the city. Ever since then, the Spoken Word culture of Pune exploded city-wide, inviting poets of many origins and professions, from different parts of the country.

I decided to illustrate some of these most regular and amazing poets of the year ’14 as a means to celebrate their art.

I also designed their logo as you see in the background and Facebook page.

Cover / Scene made in Blender. Logo made in Inkscape.

Manasi Nene is created the PPS movement at the age 17. Her poetry is like a shot of vodka — take it as a shot and it makes you high, but go slow and it slowly eases you into the zone she demands you to be pulled in. Her writing is brilliant, her rhythm is addictive, and they make for the perfect encore. A lot of her poetry is Social Justice driven, although now she has also expanded into further, somewhat inspirational and spiritual side of the art.

Recommended Poetry — Half My Love Poems

Mayank Susngi calls himself a “Traveller”, and rightfully so: As a photographer and film-maker he loves capturing the essence of the places he visits in different parts of the country. He truly “experiences” life in its various hues, in ways most of us could only “know” about intellectually but never “understand” first-hand in ways he does. His journeys, determination and vision is rewarded in the development of his vast humanity and spirit, that unravel into masterfully crafted poetry and photography that he happily shares with whoever shows interest in them. His poetry truly is a single dew-drop in which the world is reflected.

Priyam Redican is no stranger to words, whether in their blunt use or the subtlety of their meaning. She is capable of reaching into the contemporary senses that poetry needs today. This was proven when she was featured by many leading media and news outlets, such as Scoopwhoop and NDTV.

Recommended Poetry — The Tiranga (in collaboration with Being Indian)

Chandrakant Redican is a socially empathetic scientist and writer, teaching children in villages and volunteering in environmental conservation. As a poet, he thunders on stage in rapport his audience’s applause. Most of his works are contemporary in nature, and some go beyond that to truly become a serious experience of his thoughts and feelings — which is important in his works, considering he finds himself deeply rooted in the local cultures.

Shantanu Anand, while mostly heading their own Airplane Poetry Movement with Nandini Varma, has been an imperative force in helping PPS expand. Along with his fervor for finding the best untold stories in the city and helping give them a platform, he is a poet devoted to the art of Performance Poetry, and loves to break traditions and taboos to allow mainstream acceptance of this emerging artform. His poems are straightforward, simple and sincere, allowing the art to be as palatable as any pop-media.

Nandini Varma isn’t just a poet. She’s a time bomb. Gentle voice packed with powerful composition, she fire-crackles so vibrantly and so clearly to remind you that if you don’t think this valuable moment is real then you’re probably not paying attention, and if you’re not paying attention then you’re not going to know what you’ve just missed. From shipwrecked hearts to the anguish of a bully, she makes each scenario — every story — sacred for having “been”.

She was one of the first to help Manasi expand the PPS movement, and co-founded the Airplane Poetry Movement alongside Shantanu Anand, a Spoken Word art movement dedicated to reach as many regions of the country as possible. She also holds many projects under her belt, like Project Roobaroo, to hold communication and arts events between people of India and Pakistan.

Kc Vlaine is Pune’s most consistent performance poet. Sometimes he comically points out how absurd it is to discriminate against homosexuals. Sometimes he has a conversation with his butt about the issue of body image. When he’s not slamming, Kc works as a sound designer at Rolling Stache studios. In this world where everyone’s doing all they can to get that little bit of physical intimacy, Kc asks for another kind of intimacy – the intimacy that one can only get by baring one’s soul to another person, and he does it beautifully.

Apurv Inamdar is passionate filmmaker and film connoisseur, also with keen interests in Astronomy. The stories that people hide in their poetic lives inspire him to do what he loves: retelling them to the world in his cinematic zest. His mischievous deceptions, a tint of innocence, words that shoot straightforward like an arrow, and the compassionate winds that rise in its wake, have become hallmarks of both his poetry and persona. Sometimes he loves to experiment with concepts for their own sake, like narrating a story from the eyes of a necrophiliac (because an artistic imagination has no bounds, yo), and often emblematic of the silly, comical and whimsical, as well as the somber, serious and falling-into-reveries. Like a Christopher Nolan film.

Aashna Iyer takes full advantage of telling stories and her observations of little things in life that usually go unnoticed, but when taken into a different context stand out with their depth in relation to our everyday lives. That, I believe, is the hallmark of her imagination. She can project the kinds of feelings in their full clarity onto things we normally take for granted, and helps clear the lenses we see from, with subtle and simple but powerfully strung lines. Her poetry is almost always endearing and humorous, and sometimes so personal it comes a lot closer to home than one would imagine.

Recommended Poetry — My Life Is A Box

Srijan Dubey, a quintessential Liberal and an engineering student, has swiftly emerged as a strong voice of both reason and compassion in the poetry scene of Pune. He personally prefers to remain without having to stick to labels, and wants to see things as they are, open conversations for their potential and appreciate brilliance for its merits. Most of his poems are highly pro-social, with a tang of innocence in them, and while his poems are mostly inspired by personal experiences, his writing allows us to imagine having been in his shoes — and most of us have. He demonstrates the darkest hours we’ve all been through, and slowly reveals the hidden strength we’ve all had all along even though it’s been hard to find.

Sovit Subedi may not be from India, but he has been part of the Pune Poetry Slam scene since the inception. He looks up to Rives, a Spoken Word poet, as his role-model, which explains how utopian, personal and creative his poetry can be. Sometimes he procrastinates on his studies by writing a poem on Procrastination, and sometimes he creates blueprints for imaginary towns where hoverboards are a primary means of commuting. The most common thing about majority of his poems is that they all provide a very eccentric, but not too far from reality, messages of hopes and dreams. He encourages his audiences to break away from conventional ways of thinking, and shows them how some things that seem impossible may in fact be things that are within reach from a different perspective. Sometimes he breaks away from these themes too, just to bask in the everyday goings of the world, looking deep into the lives of people we seldom think about.